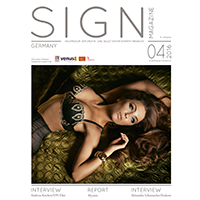 Spring does not only bring back sunny days, but also preparations for the trade show season and the first shows of the season are happening now. This is what the toy manufacturer Svakom is getting ready for, as Brand Manager Alexandra Schumacher told us in an interview. There is another aspect of new developments at Mystim this April. The German manufacturer of e-stim-toys lately set the first cut with a spade at their planned new company site.

At VPS Film Entertainment, the German label Videorama brings along a fresh new aspect in the assortment. The film distributor will be responsible for the exclusive distribution of the label from now on. At Shots, customers can now order the brand Vive. The sex toy line has a lot of potential due to its extraordinary designs and technological functions. Sign Magazine further took a closer look at Joydivision’s Xpander.

We present the French toy manufacturer Lovely Planet and offer an interview with Christian Richter from Little Hollywood. We further inform you in our April issue what is new at Hot Productions, O-Products, Scala Playhouse and many more.

You can find the new issue here (after login).