03.05.2015 | Beneden Leeuwen, The Netherlands – For the first time in the history of Shots they are going to sponsor a major soccer match between N.E.C and Feyenoord. N.E.C. is Oscar’s favorite team. Ever since his childhood he went to the games with his father and that is where his love for the club started to grow. Years have gone by and Oscar has turned into a super fan, attending all their games apart from when he’s on a business trip when he follows them online.
In the season 2013-2014 N.E.C had some difficulties and got demoted to the First Division. A big shock for the supporters and for Oscar. A new game plan came in action and ever since they are on a roll. In the season 2014-2015 they became champions in the First Division with an impressive 32 victories and 98 points getting them promoted again to the Premier Division. In the present 2015-2016 season things are looking good, and with several victories against some of the biggest clubs in the Dutch competition they even have a shot at making it to the playoffs in the UEFA Europe League. 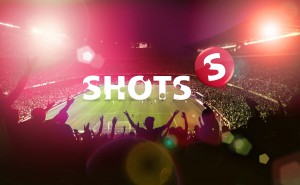 At the moment N.E.C. is the best performing team in theProvince of Gelderland as they left their competitors Vitesse behind them in the competition. If they win this important game against Feyenoord they will have a huge shot at making it to the playoffs. Some amazing things have happened already when N.E.C came back into the Premier League at the beginning of the season, and if these playoffs become a reality it will be a dream come through for both N.E.C as well as Oscar! That is the reason Shots has decided to become the shirt sponsor for this specific game between N.E.C and Feyenoord, showing their club all the support they can give. It gives N.E.C a lot of confidence that they won the last encounter against Feyenoord with a 3 – 1 score, but they know that this big obstacle has to be taken before getting into these playoffs. Feyenoord is not the easiest opponent with 14 national championships in their pocket and being this season’s National Cup winner. On paper they are the stronger team but stranger things have happened.
This important match will be played on Sunday the 8th of May which is the day after the Giro d’Italia has passed the Shots offices!