16.08.2016 | Beneden Leeuwen, The Netherlands ─ Monday the 18th of July was the start of the Shots Sales Week 2016. One of the highlights on the very first day was, as usual, the presentation of the brand new Shots release. On the same day Pharmquests also came with a new addition to their already vast assortment. 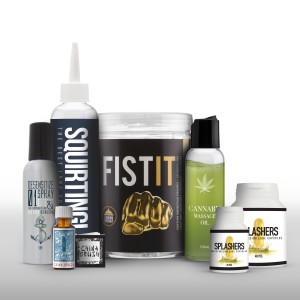 One of their bestselling concepts, called Fistit, now also comes in a new big jar with 1000 milliliter of lube. Especially designed upon request of several retailers, it promises to become an instant hit! Pharmquests also introduced a Cannabis Massage Oil, which relaxes the body and regenerates the natural flexibility of the skin. Also new was a personal vaginal moisturizer called Splashers which is intended to enhance, ease and comfort intimate sexual activity. It comes in a 20pcs and 40 pcs version.
The China Brush is another new product that was added to the collection. It features a small bottle with a brush attached to its cap and providing a numbing effect to a longer lasting erection. The Desensitize spray in a 50 milliliter version was also added to the collection. This is the spray of choice for postponing an orgasm and the spray cap makes it really easy to apply. Last but certainly not least to mention is the new 250 milliliter version of Squirting Lube, which features a tip allowing direct insertion into the vagina.