An afternoon with the Queen

29.07.2016 | Bath, United Kingdom ─ Lovehoney’s co-owners have returned to their humble Bath headquarters after a reception hosted by the Queen at Buckingham Palace. Richard Longhurst and Neal Slateford met the Queen, Prince Philip and other senior royals at a celebration for Queen’s Award winners. 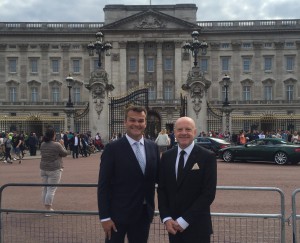 es over the last three years. The award – described as ‘the highest accolade for business success’ – allows Lovehoney to use The Queen’s Award emblem in advertising, marketing and on packaging for a period of five years as a symbol of quality and success. Slateford said: “It’s a huge privilege for Lovehoney to be honoured by the Queen.” The Queen is Britain’s greatest trade ambassador and consumers trust a brand with her patronage. “It just shows how far we have come as a company and how sex toys are becoming more and more mainstream.” While at the palace, Slateford and Longhurst spoke with a number of royals and enjoyed meeting fellow Queen’s Award winners from across the country. Slateford added: “We said hello to the Queen, and thanked her for having us over. We mentioned to The Duke of Edinburgh that we were in the sexual wellbeing business. He nodded and smiled, swiftly made his excuses and moved on. Richard was just happy to meet a real Princess, as he’s met all the ones at Disneyland already.”

The pair started selling sex toys online 14 years ago, with stock kept under Longhurst’s bed, and now run a booming international company which holds the worldwide licence to manufacture the official Fifty Shades of Grey sex products. The company employs over 200 people at its Locksbrook Road headquarters. Profits at Lovehoney shot up 79% last year to £3.7 million and it was highlighted as one of Britain’s top 100 most profitable private companies by the Sunday Times.