Mindblowing orgasms in less than a minute!

27.06.2017 | Ottawa, Canada – Zumio will bring orgasms to a whole new level, thanks to its sensational Spiro TIPTM that is completely new on the market. This beautiful product was born out of frustration when a busy, single mother wanted to have an orgasm in less than a minute. She wanted more than the available toys on the market that used irritating vibrations and were too big for specific pinpointing sentive areas. Female designers solved this problem and invented Zumio. Many prototypes and years of testing later, Zumio will now be available in Europe in August. The expectation is that soon the whole of Europe will use this unique product. 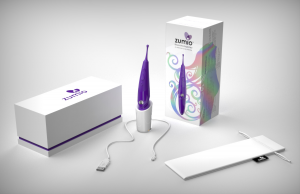 The light weight and non-vibrating handle makes Zumio easy to hold in one hand, so you can use Zumio solo or with your partner in many positions, even while making love! Zumio’s small, oscillating tip penetrates with a massaging effect that reaches deep while being gentle on the surface nerve-ending in the sensitive areas of the pleasure zones.