23.05.2016 | San Francisco, California, USA – Goop, the lifestyle site from Gwyneth Paltrow, made waves this week publishing their first-ever Sex Issue, which featured two products from Jimmyjane, the design-centric brand and leader in the premium pleasure product category. The list of “Not-So-Basic Sex Toys” included Jimmyjane’s iconic Form 2 Vibrator as well as the Seduce Me Feather Tickler. The highly curated list also featured two picks from Jimmyjane’s sister brand, Pipedream Products, including the Fetish Fantasy Gold Beginner’s Kit and the Fetish Fantasy Glass Ben-Wa Balls. Goop, which began in 2008 as a newsletter where Paltrow could share her lifestyle recommendations, has become a unique voice in the media world known for spotting early cultural trends, and featuring eccentric to excessive luxury items. 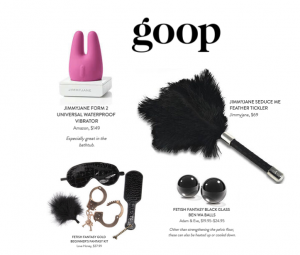 With a focus on healthy living, quality ingredients and luxury designs, Goop is a fitting match for Jimmyjane. “It is great to see someone of Gwyneth’s status and notoriety embracing sexual health and wellbeing,” stated Robert Rheaume, President of Jimmyjane. “Pleasure products have the ability to enhance our sexual experiences and relationships, and seeing sites like Goop embrace this notion helps build confidence and acceptance within the public. They clearly did some research, especially in choosing our Form 2 which has always been a top seller in the industry, and we were honored to be a part of this list.”